AARMS held its first Industrial Problem Solving Workshop (IPSW) during the first week of July at Dalhousie University. The four-day workshop was a great success with over 45 participants (6 industry reps, 28 students, 11 faculty) from across Atlantic Canada and 4 students from outside the region as well! At the start of the workshop, five companies presented mathematical challenges connected to their business. Over the following three days, the participants worked in teams of 5-10 to find solutions to these challenges. See  https://aarms.math.ca/ipsw2018/ for a description of the workshop, list of participants, problems description and links to the companies.

The problems, and the solutions found, spanned a wide range of mathematical, statistical, and computational approaches. The Black Arcs presented an interesting geometric problem of representing the street map of Sackville NB in a accurate but more readable format. The team presented two different solutions, one based on continuous optimization of the location of the nodes of the graph and another on discrete linear programming. Both hinged on the definition of appropriate fitness functions.

EhEye presented a problem of identifying violent behaviour in surveillance videos. Once again, two approaches were explored. One tracked objects in the video and looked for increases in the velocity of the objects. The second used an array of statistical measures of the video and trained a regression model to detect violence.

A different type of problem was presented by the Fundy Ocean Research Centre for Energy (FORCE). The FORCE problem was focussed on understanding the wake behind an island in Minas Passage, a site being considered for tidal energy development. Students used principal component analysis and image processing techniques to find the bounds of the wake and compare radar observations of the wake to numerical simulations. 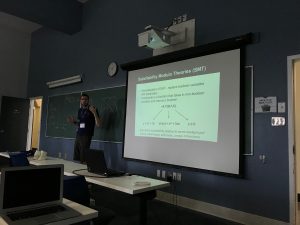 QRA’s problem drew on methods from what would typically be called pure mathematics, mathematical logic and theoretical computer science. QRA’s problem involved improving systems testing their software which uses Satisfiability Modulo Theories (SMT) solvers. The workshop team used a proof-by-induction to establish that one aspect of the software was not performing as expected. “These bugs weren’t found by random chance, but rather by the students attempting to prove things about our software, and probing the software when difficulties with the proof were encountered — proof-directed bug finding!” As a result, QRA “will be making immediate changes to our software as a direct result of what the students found at the workshop” making “our software both more robust, and more capable.”

Finally, Stepscan challenged the students to track individuals as they walked across their pressure sensitive floor panels. Students used a variety of metrics based on normal walking patterns and a probabilistic model to predict the most likely candidate for the subsequent step.

The response from those involved in the workshop was extremely positive. The industry reps commented on the importance of establishing “new connections made with instructors and interested students for future collaborations” and pursuing “an Engage grant to further explore the problem.” Students commented that: “The IPSW was a great experience and helped me identify skills that I can contribute in an industrial setting“ and “This was an excellent workshop! Definitely the most useful/interesting one I’ve attended in all of my academic career.” Based on the post workshop survey results, students were significantly more interested in academic-industry collaborations and were more likely to consider a career outside of academia. Students also recognized the important contribution of our sponsors, NSERC, PIMS and AARMS, noting that “If the workshop was not funded, I would not have been able to attend.” As well, MITACS provided a $1,500 voucher towards an Accelerate Fellowship that was awarded to the EhEye team. 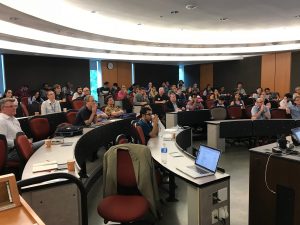 Along with the workshop, AARMS held its first Math/Stats Networking Event called “Formulating Success” in collaboration with Springboard Atlantic and NSERC. At the event, 6 companies and 7 researchers gave presentations on their research and experience with industry-academic collaborations; ACENET described how its resources can support research; and Acadia’s Office of Industry & Community Engagement outlined the many funding programs that support industry-academic research. Over 60 people attended and enjoyed wide-ranging discussions while networking after the presentations.

Overall, the first AARMS IPSW was a busy, productive and successful week. So successful, that planning has already begun for the next one to be held at the University of New Brunswick (Fredericton) in May 2019! The workshop will be a full five days, with more time for student training and solution formulation. Keep an eye on the AARMS webpage for more details.